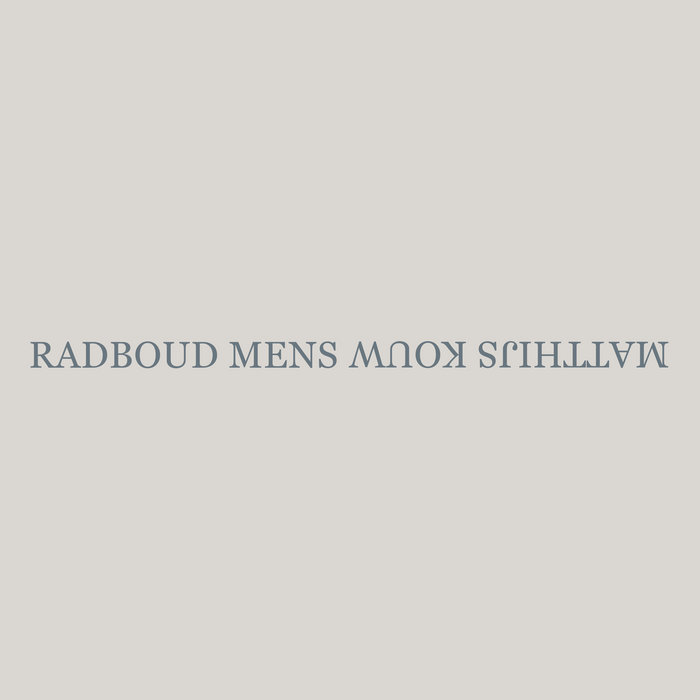 Radboud Mens and Matthijs Kouw have collaborated since 2001, when they started working on an album firmly rooted in the ‘clicks ’n cuts’ movement of way back when. After collecting source material using only feedback produced with a mixer and minidisc recorder that was broadcasted live on Amsterdam’s Radio 100 to unsuspecting listeners, they started working on their album ‘Mens/Kouw’ (2002), which features both rhythmic pieces and more abstract elements. With the passing of time, they found themselves working more and more in the realm of tonal and timbral long-form pieces. Their use of software, recordings of acoustic instruments and a modular synthesizer, leads to what can perhaps be described as 'electro-acoustic drone' that nods to the American minimalists of the last century.
This record is the first of a two-part album and is recorded live in the studio in december 2014.

If something is boring after two minutes, try it for four. If still boring, then eight. Then sixteen. Then thirty-two. Eventually one discovers that it is not boring at all
[John Cage]

Whenever we hear sounds, we are changed, we are no longer the same, and this is more the case when we hear organised sounds; music.
[Karlheinz Stockhausen]

The highest point of music for me is to become in a place where there is no desire, no craving, wanting to do anything else. It is the best place you have ever been, and yet there is nothing there.
[Terry Riley]

Drones that are heard constantly (fluorescent tubes, mechanical ventilation, refrigerating equipment, high voltage lines in the countryside) are all aligned on the frequency (and harmonics) of the electrical network (50Hz in Europe, 60Hz in North America). When we ask someone to sing a note spontaneously, the pitch often corresponds to a harmonic of the electrical network frequency. The evolution of lighting techniques, the amelioration of the quality (notably acoustic) of household appliances, and the wider use of low voltage rather than high voltage leads us to believe that this phenomenon will diminish with time. Some drones are so integrated into our perspective habits that any modification of their characteristics results in confusion. For instance, the replacement of the burner in a central heating boiler can result in complaints if its sound spectrum is different, even if it is actually less noisy in terms of dB. When a listener becomes accustomed to a sound of a certain spectrum, this sound will be easier to ignore than a sound of the same type that may be even quieter. This new sound requires a listening adaptation before it is integrated into the familiar soundscape. In the physiological domain, there is tinnitus - a drone or ringing sound that originates within the ear. Both children and adults use a form of linguistic drone: grumbling and mumbling. The general intent of mumbling is to mask the intelligibility of a message in the low frequencies when the speaker does not want to be understood. Mumbling is the oral expression of an intense introverted activity. (Napoleon's grumbling was famous and frightened new secretaries for correspondence!)
[Jean-François Augoyard And Henry Torgue]